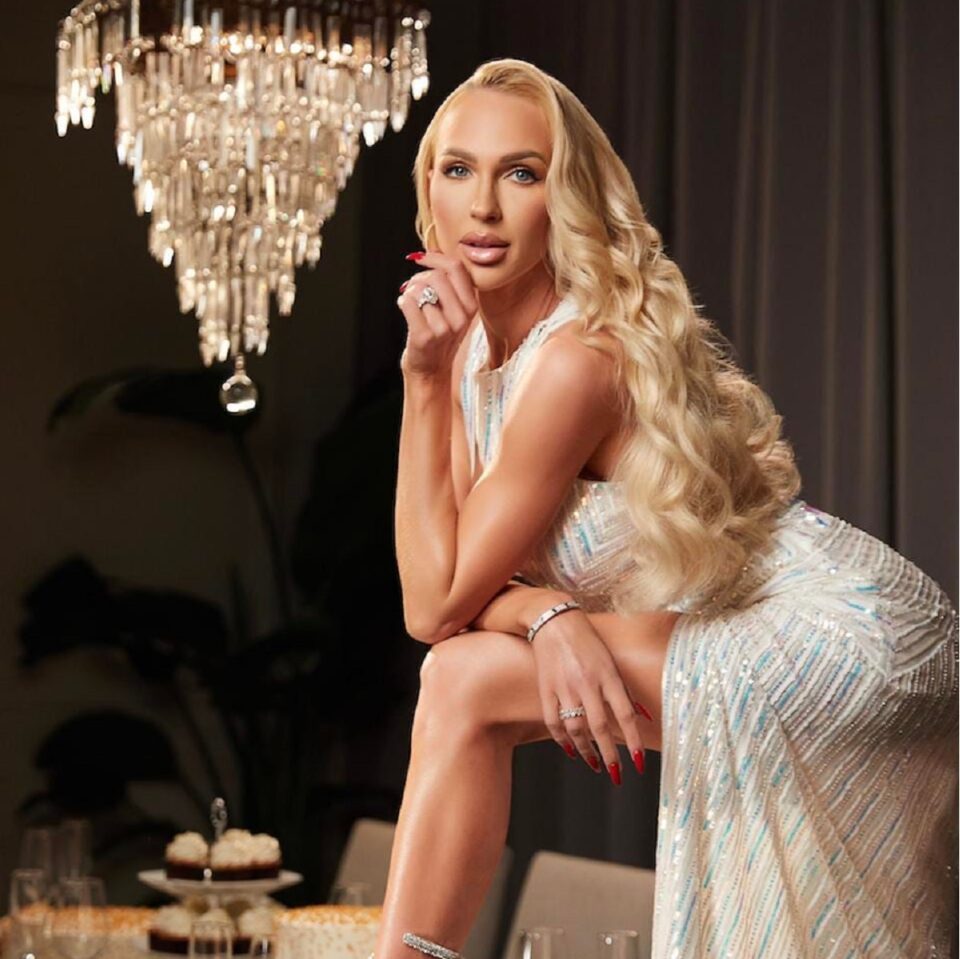 Christine Quinn, star of Netflix’s Selling Sunset program, continues her fashion ascent and the show continues to bring in more audiences! With 4 seasons, Selling Sunset is a hit and propels Christine Quinn to magazine covers, famous events, and stardom! But is Christine Quinn’s net worth growing as well? Let’s find out how she is currently worth 3 million dollars even though her wealth estimate was listed at around 1.5 million according to Bustle.

Driving away into the setting sun in a yellow Lamborghini, Christine Quinn is the brilliant, overdramatic diva of Selling Sunset on Netflix! No one but her can get through an entire pregnancy wearing 6-inch Louboutins!

Who is Christine Quinn?

Christine Quinn was before being hired by the Oppenheim group as a real estate agent a recognized model and had even taken her first steps in the field of comedy.

Christine was a famous model and had posed for renowned publications like Maxim Magazine and Vogue, according to some online reports. She is also an actress who took the opportunity to make a name for herself in the film industry and has starred in several productions to date, for example, she notably made appearances in popular television series like “Ballers”, “NCIS: Los Angeles” and “Drop Dead Diva”.

What is Christine Quinn’s net worth?

With such a brilliant and dynamic career under her belt, it’s no surprise that Christine Quinn has managed to amass a fortune of around $3 million. However, with her film in post-production, an active role in the show “Selling Sunset” and a book coming out in a few months, we can expect his net worth to increase in the future.

The first season of Selling Sunset, a Netflix reality show about the Oppenheim Group, was a first in high-end real estate in Los Angeles – and Christine Quinn was able to join this project perfectly!

Any teen movie fanatic knows that the villainous queen is often depicted with a physique that social conventions define as “perfect”. Christine Quinn has all the paraphernalia to do that on reality TV to keep the views high: endless legs and extra-long blonde hair whose extensions are always stylized to the extreme. I mean common, she takes the plunge in 15 heels!

Fashion has always had a thing for bad villains, especially seen through Cruella in Disney who has been collectively forgiven for wanting to skin up baby dogs in the name of the style of her wardrobe. It was therefore only natural for the industry to team up with Christine Quinn, heroine of the Netflix program Selling Sunset, where real estate agents looking like supermodels crepe their buns while tempting to sell houses. It needed someone to play the mean girl and Christine took this role head-on. Low blows, betrayals, rumors and murderous verve, the blonde puts on a show and feeds the intrigue. What makes her unsympathetic? Nothing! The fans revel in an attitude that she declines in gestures as in appearance.

All of this is to say that reality TV acting has made her to be one of the highest-paid agents in the Oppenheim Group in 2019 with an overall whopping amount of $9 million.

Another large chunk of Christine Quinn’s net worth comes from when this model and fierce actress paid attention to the world of real estate and started working for the Oppenheim Group.

She was able to bring audiences to the real estate market backed by her  California Real Estate Exams which she certified in 2019 and thereafter started her career as a real estate agent.

schooling in Texas but then for the glitz and glam moved to Los Angeles.

In terms of assets and properties, Christine Quinn is a real estate agent herself, and Christine took up properties across Los Angeles and other states in the USA, for example, she purchased an extravagant $5 million mansion at the Hollywood hills in 2019, after she married her husband Christian Richard.

In addition to her work as a real estate agent, Christine also earns a lot of money through her brand deals on social media.

Christine Quinn, queen of style and the queen of magazines. She was able to grace Grazia UK, Vogue Ukraine, Harper’s Bazaar Vietnam, Cosmopolitan Romania for photoshoots and began to attract the favors of fashion names. For example, she was in the front row of the Christian Siriano show, in a printed suit with a matching hat. The reality star was also in New York during Fashion Weekend.

The face of fashion:

Christine Quinn’s pieces are luxurious, branded but above all audacious. No, Christine Quinn doesn’t dress to please, she dresses to impress. Her fifteen-centimeter heels that she doesn’t even take off to visit multimillion-dollar villas with wooden floors ( “I don’t care about my shoes anymore than those damn floors,” she tells Vogue ) are there to crush her competition, and increase her brand image on reality TV!

Not only does the producer of the show like this, her fan following helps her earn millions as she launches fashion deals! Each of her looks exudes crazy self-confidence and all-terrain ambition – which is what fans want to buy from her! Similarly, in business as in fashion, Christine does not let anyone dictate her behavior – way of life and outfits that have made her successful – fans will want her branding!

Separately, in December 2019, Christine married multi-millionaire Christian Richard, with whom she currently shares one child and resides in a multi-million dollar home in Hollywood Hills.

Quinn was the star of Netflix’s Selling Sunset and right after finishing the first season of filming, she met the love of her life, Christian Richard, a tech industry titan. There are two origin stories for this couple that began when her fellow castmate Mary Fitzgerald said he was a client and was dating someone else when he met Quinn. But the two “just clicked” into Fitzgerald’s narrative. Only this is not exactly the sequence of events. Quinn clarified the details in a recent interview where she said, “My girlfriend went on a date with him and she said, ‘Hey, I went on a date with this guy that I didn’t really don’t like. I know you are single, you might want to date him. So I went on a date with him after Mary Fitzgerald did.”

As of 2022, the couple are still married and their wedding was featured on the show as the couple planned their wedding. Quinn shows off her gigantic engagement ring in an Instagram post – which would have cost close to a million.

This has us questioning what Christian Richard does for a living?

All Quinn says about her husband’s job is that he’s “big in the tech world”, he has a degree from MIT and has now tried again. She doesn’t say much more than that about his work except that he’s a software engineer and businessman and you can’t find him on LinkedIn to see what his professional background is. He doesn’t have a public social media account and Quinn, although a prolific Instagram user, barely posts pictures of her man. Whatever he does, he has made enough money that a $5 million house is in his price range.

Quinn says she never told him she was on a reality show when they first started dating. It wasn’t until fans met her in public that her rich husband even realized there was more to his career than just selling luxury homes. She asked Christian Richard if would be up for it and he agreed, but he’s not the typical reality TV star, because her husband is really, really shy, but decided to do it for me,” she told reporters. “Christian is kind-of into the show and, bless my husband’s heart, he’s trying, but [filming and reality TV] is a really awkward thing – it’s non-organic, it’s not really reality.

The couple married in December 2019. On the Season 3 finale of Selling Sunset, Richard and Quinn were married in a beautiful, Gothic-inspired ceremony. She even wore a stunning black dress!

In August 2020 via Instagram Quinn even shared the news with her followers and opened up about her secret marriage to the tabloids. Quinn said at the time that she wanted to get married in December to start the new year [as husband and wife], and a winter wonderland theme with a wicked twist is forever memorable for the icy queen of Selling Sunset.

On February 17 2021, Christine Quinn revealed that she was pregnant with the couple’s first child.

It’s no secret that she did not appear in the teaser for the upcoming Season 5. As the fourth season draws to a close, her dramatic argument with Chrishell Stause, Mary Fitzgerald, and the rest of the Oppenheim Band seems to mark the beginning of the end for Christine on the reality series. Not only that, her friendships with the others have been mended since filming stopped. While the other girls celebrated big occasions, including Heather Rae Young’s wedding, Christine wasn’t even invited. In a video posted from the Oppenheim Group LA offices, Christine shows the rest of the gang taking group photos while she is ignored in the back of the room – ouch!

But hold on, there is still good news. Although the Season 4 finale seemed to suggest that her days with the group were numbered, Christine has already confirmed that she will appear in Season 5 of Selling Sunset.