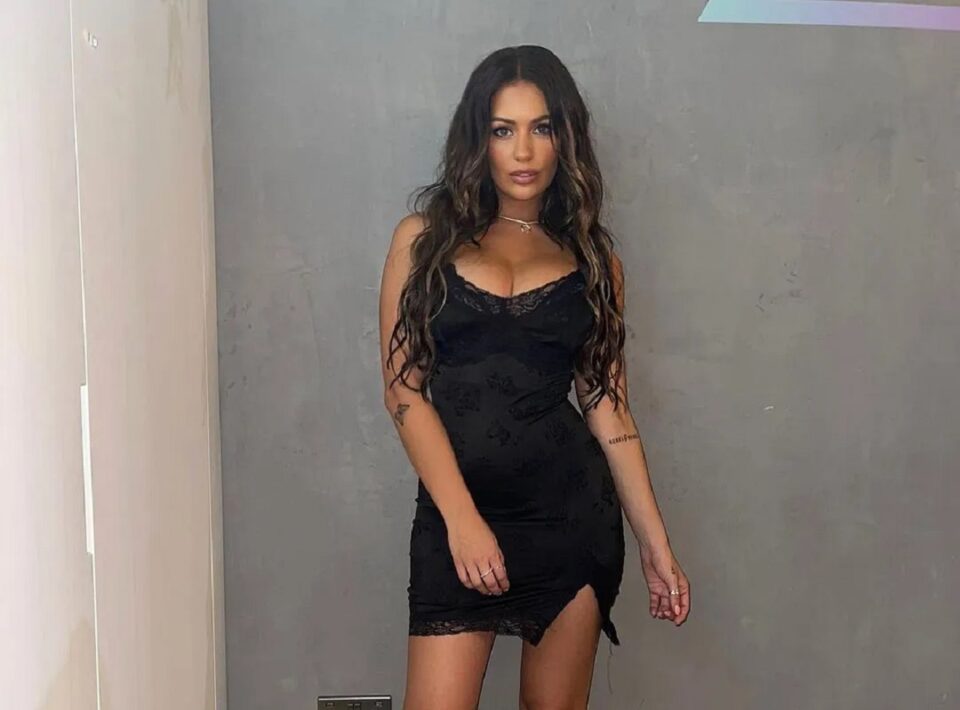 The soft porn model was super excited when she later found out that her first assignment was published in the magazine, as it was her childhood dream to appear on page 3. Not long after being introduced to the world, she started landing other modeling gigs and, subsequently, she became a regular face in magazines such as Loaded and Nuts. Peers had the highest entry in “Nuts 100 Sexiest Babes 2010” at number 6. She is a Manchester City supporter and is featured on the team jersey as a fan on Soccer AM. From then until now, the model has not lost her touch and continues to appear on page 3 and has done many projects with them. In 2011 and 2012, Holly was featured on the cover of Page 3 calendars, as well as the 2012 Hot Shots Calendar.

2. She has 340k followers on Instagram as a THOT (google the meaning):

The beautiful model was born as Holly Jade Peers on July 30, 1987, in Salford, England, in the United Kingdom and would go on to use her body to take advantage of fame and people with an endless well of sex additction mainly those who have their hands down their pants while their parents or wife sleep nearby.

It is sad to believe this but Peers was raised Christian by her parents whose names have not yet been revealed. Similarly, information about his family background, siblings, early life, education, is not available at this time.

3. Peers is an avid music lover (but do you really care about that?)

Despite Holly Peers’s demanding job and other time-consuming activities, Peers still finds time to have fun, when she’s not using her body to satisfy the craving of men who need to degrade women. When she’s not working, she’s somewhere listening to songs by famous musicians. Of all song-based music, rock music is her favorite genre, while Brixton, London, UK-born singer-songwriter David Bowie (David Robert Jones) is her musical idol. The model once shared that her favorite workouts are Yoga and Pilates, while her favorite TV show is Sons of Anarchy.

In addition to music, the model has a very soft place for football. Her favorite football club is Manchester City F.C, based in Manchester, England and the woman who uses her body for likes, fame, and self esteem often appears on Soccer AM on the club’s jersey as a soccerette. Soccer AM, which is primarily based on the English Premier League, is a popular British comedy and talk show produced by Sky Sports.

Peers, as mentioned above, is a total That Whore Over There (THOT) on social media but regardless of this, she has her eyes set on making it big in the modeling industry which is very welcoming to someone who has worked in a variety of interesting places, Peers has met many people in real life, but she has most of her following on social media, where she is an influence and has a large following. Currently, more than 330 thousand people follow her on her Instagram page, while her Twitter account has more than 350 thousand followers. If you are wondering why she is such a role model and a huge inspiration to many young men and older men who have no love life on social media, the answer is that Holly Peers is pretty and naturally gifted.

Holly often shares nude photos on her social media pages and they attract a reasonable number of admirers, especially men, to her side, and she is able to profit those who think with their penis rather than their brain.

For now, it is not known if she intends to grow her modeling career or venture into other businesses one day. Until now, she has impressed many hearts with her passion and dedication to the race she loves so much and she is supposed to earn a reasonable sum of money from this very race. Her net worth is still under review and the exact amount she earns as a model has yet to be revealed.

5. Body measurements that you will never touch:

Call her the queen of curves and you’d be right. With her envious hourglass figure that many women desire, it’s no surprise that Holly Peers is one of England’s most curvaceous glamor models. People admire her a lot because she has a voluptuous body shape, which enhances her beauty and height of 5 feet 7 inches (1.70 meters). The brunette beauty’s cup, shoe, and dress sizes are clocked in at 30F, 7(US), and 4(US) respectively, while her body measurements are: Waist Size: 24 inches or 61 centimeters, Hips size: 34 inches or 86 centimeters and Breast size: 36 inches or 91 centimeters. She has blue-green eyes.