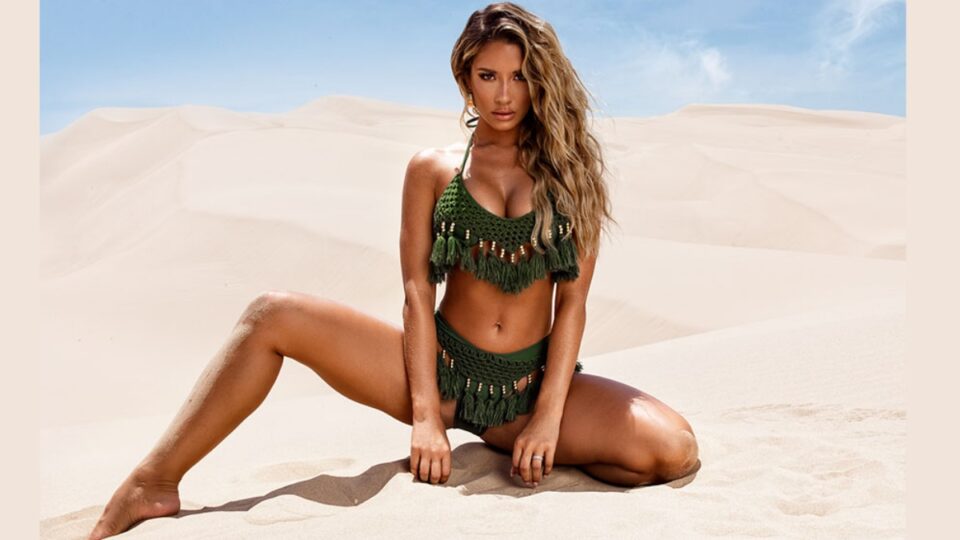 Sierra Skye has over four million followers on Instagram, she is 22 years old and her career as a model has taken off with more and more strength, which allows her to have a great present and, better yet, a very promising future. Born Sierra Egan, she has Italian-Native American origins. She was born in Los Angeles, United States, so she has dual nationality (American and Italian). On her Instagram account, she mainly wears bikinis and appears in suggestive poses taking advantage of her outstanding physique, which has undoubtedly favored her dizzying career and, in addition, conquering the millions of followers who approve of each of her publications. Her time in the spotlight has earned her the title of “the woman with the impossible body”. Her body measurements are: bust 91 cm, waist 60 cm, and hips 93 cm. As has been published, she is a regular fitness practitioner, which keeps her in great physical shape, with intense routines at least five times a week. In this post, we will find out more about her. Let’s get started.

Sierra Skye: All You Need To Know

While a lot of beauty is subjective and people can have preferences. However, one look at Sierra Skye and it’s almost impossible for anyone to deny the good looks of the woman with the “impossible body”.

When was Sierra Skye born?

Sierra Egan, popularly known as Sierra Skye was born on November 6, 1995, in Los Angeles, California, United States of America. She is of Italian and Native American extraction. However, there are no records of who her parents are, while some reports say that she has a sister.

How was Sierra Skye’s childhood?

She had what can be called a normal childhood; she played with dolls like most girls, she attended private school, and was in a dance club. Around the same time, Sierra Skye developed an interest in fitness modelling. She took her talents to social media right away and started building a following.

Sierra Skye’s first foray into the world of Instagram modelling was far more conservative than her posts today. It just showed her legs with a kitten through a May 2015 post. Since then, Sierra Skye has steadily grown her following on social media, particularly on Instagram with several adorable bikini photos that she advertises for different brands. She handles her modelling contracts through Elite Model Management.

Which are some of the brands that Sierra Skye has modelled for?

Over time, her following continued to grow just as she started to catch the eye of some brands who wanted to make her the face of your products/services. Sierra has worked with brands such as Boutinela, Gooseberry Intimates, Fashion Nova, MESHKI, Moda Glam Boutique, PrettyLittleThing, Plumeria Swimwear, The Hair Shop, ONEONE Swimwear, and White Fox Active.

How popular is Sierra Skye?

As stated above, Sierra Egan or Sierra Skye is where it is today due to the exposure it received from social media. Her Instagram profile (@sierraaaskyee) has over four million followers. She joined the Facebook-owned photo and video sharing social networking site on May 1, 2015, and has steadily grown a huge following of fans with her uploads of lingerie and a couple of nearly nude photos. On Twitter, there are a couple of accounts with names similar to hers, but none of these accounts have been verified as the authentic Sierra Skye Twitter account.

Who is Sierra Skye dating?

Sierra Skye is dating popular Instagram photographer Roman Palumbo. He was smitten by her even before he had met her in person. The couple has been going strong since they started dating and they regularly publish vlogs chronicling their relationship through their YouTube channel, Roman & Sierra’s World.

How “impossible” is Sierra Skye’s body?

Sierra Skye stands at a height of 5ft 6in or 1.67m and weighs 53kg or 117lbs. The beautiful blonde model with brown eyes has a chest/bust size of 35 inches/91 cm, a waist of 24 inches/61 cm, and hips of 37 inches/94 cm. While there were rumours of her being ambidextrous, she is actually left handed.

How does Sierra Skye maintain her “Impossible Body”?

While genetics play an important part in someone’s appearance, if you don’t work on your body, you aren’t going to look good, no matter how “impossibly beautiful” your natural gifts are. Sierra Skye has a strict diet and workout regimen. She lifts weights five times a week and does cardio at least three days a week. She trains for anywhere between 45 and 120 minutes regularly. The woman with the “Impossible Body” is a total beast in the gym. Her workout duration depends on what part of her body she is working on and/or what she wants to accomplish in a given session. For her cardio, she finishes in 15-30 minutes by running on a treadmill or walking outside.

What is Sierra Skye’s net worth?

Considering how fast her career and influence on the social network is rising, the sky might not be the limit for Skye as she is definitely ready to conquer more space in her industry of choice. The woman with the “Impossible body” has an estimated net worth of $1 million and it’s expected to keep on increasing as she has amassed this incredible wealth after just a few years in the spotlight.