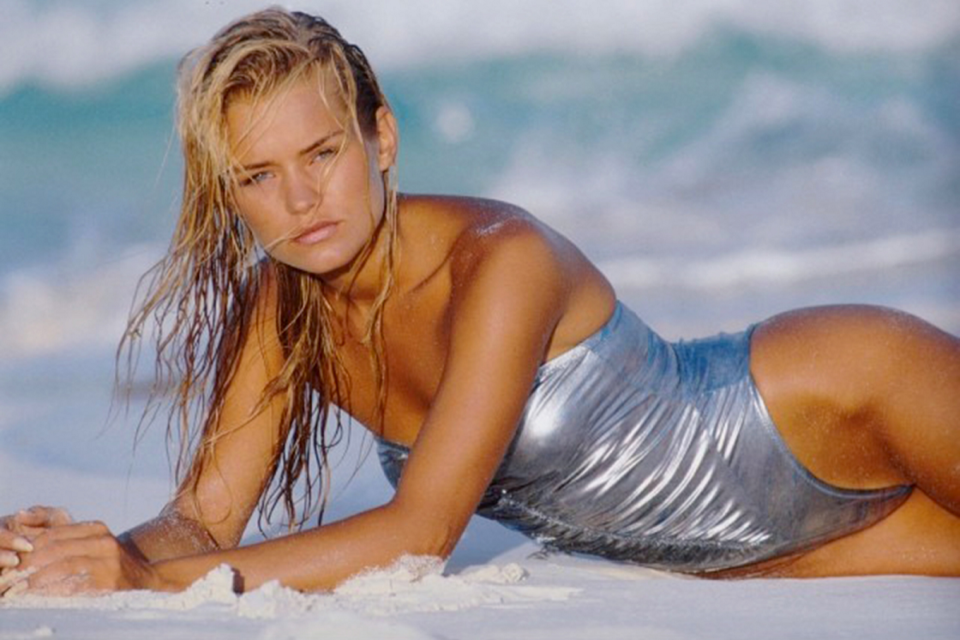 Fame can be achieved in several ways; and for women like Yolanda Hadid, who has become famous for more than one thing and has been in the public eye for a long time, one must wonder how she did it. Yolanda Hadid is known for her modeling career, her work as an actress and film producer, and is best known for appearing on the reality TV show The Real Housewives of Beverly Hills.

The Real Housewives of Beverly Hills star started as a model in the eighties, first in the Netherlands and then quickly abroad. The Dutch-American model also did some work as an interior designer. Yolanda was well known before her daughters’ popularity took off, through her marriages to Mohamed Hadid and David Foster and her participation in the reality TV show The Real Housewives of Beverly Hills.

Yolanda van den Herik was born on January 11, 1964 and grew up in Papendrecht in the Netherlands, in a family of Christian origin. She has a brother.

When she was seven, her father died in a car accident, and her mother, Ans van den Herik found herself having to raise her two children on her own. To provide for and care for her family, Yolanda Hadid worked a number of odd jobs. It is unknown if she had a high school education and it is very unlikely that she attended university when her modeling career began at 16.

At the age of 16, Yolanda Hadid was asked by designer Frans Molenaar to replace one of the models on the catwalk. Then, Hadid was discovered as a model by Eileen Ford, the owner of Ford Models. She signed a contract with the modeling agency and ran fashion shows in Paris, Milan, Hamburg, Sydney, Cape Town, Tokyo, New York, and Los Angeles. After fifteen years she stopped modeling to start a family. The Dutch-American model went to relocate in Los Angeles with her then-husband Mohamed Hadid.

3. Other jobs and a career in reality TV:

As Yolanda was expanding her modeling career, she tried her hand at other projects, one of which was a film career – as a producer and actress.

In 2011, she participated in two seasons of the reality TV show Nederlandse Hollywood Vrouwen featuring a group of Dutch women living in Hollywood.

The wealth of Hadid’s career on the big screen is on reality television – in 2012, she joined the cast of The Real Housewives of Beverly Hills. As the name suggests, it is a show about the living housewives in Beverly Hills. This show brought her back into the spotlight after what appeared to be the break she took from modeling.

She would appear in four seasons before leaving the show.

In 2014, she appeared in the GUY clip of singer Lady Gaga with her partners from the show Real Housewives. The same year, she was invited to the show The Real Housewives of New York with Brandi Glanville for a lunch with Kristen and Carole, two New York housewives.

She married for the first time to the Palestinian Arab real estate developer, Mohamed Hadid in 1994 and divorced in 2014. Together they have three children: two daughters, Jelena Noura Hadid(Gigi) and Isabella Hadid (Bella) who are both models for IMG Models, and one son, Anwar Hadid. After her divorce, Yolanda relocated to Montecito with her 3 children in 2001 and worked from home as an interior designer.

She married a second time to the Canadian composer and producer, David Foster on November 11, 2011 after an engagement on December 24, 2010. However, they separated in 2015 and by 2017 their divorce was finalized after which she re-used her first husband’s last name.

The former model lives a secluded life on her farm in Pennsylvania out of the spotlight. “My happiness is buying a little pony, feeding my cows and goats and getting my fresh eggs from my hens, that’s really where my joy is,” Yolanda stated to Money Magazine in an interview.

6. Yolanda Hadid is also a grandmother:

Yolanda has now also become a grandmother: Gigi Hadid has had a child with singer Zayn Malik, who we know of course as an ex-member of the boy band One Direction.

Meanwhile, another grandma close to the Hadid family died. Last year Ans van den Herik passed away, the mother of Yolanda Hadid and grandmother of Gigi, Bella, and Anwar.

At the time, the Hadid family shared many tributes to their mother and “grandma”.

In an Instagram post, Yolanda spoke about the death of her mother, reflecting on the loss exactly one year ago yesterday. It’s not often that a family with so many spotlights on itself shares such beautiful, yet intimate images. In the post, we see a photo of the coffin, covered with white flowers, green ornamental branches, and pink butterflies. Yolanda stands beside it with her arm, hugging the flowers. In a second photo, Yolanda’s children Gigi, Bella, and Anwar appear with tear eyes by the coffin. With these intimate photos, Yolanda commemorates the funeral and once again pays tribute to her mother saying: “The loss of my mamma one year ago left a heartache no one can heal, but her love that lives within me nobody can steal”.

Anwar Hadid was also present at the funeral a year ago, which took place in Rotterdam. Gigi joined the family (at that time on a break with Zayn Malik) with American Bachelorette star Tyler Cameron, who assisted her at the funeral.

Yolanda Hadid could rise above any challenge that life has thrown her way and struggled to have a place at the forefront of the world of entertainment. The hard work she put into this matter paid off, more than that, her divorce with Mohammed Hadid made her very rich!

She received a huge divorce settlement from her former real estate millionaire husband that adds a good portion to her estimated net worth of $45 million.

In 2018, Yolanda was the head of the reality documentary Making a Model with Yolanda Hadid. This show puts young models, accompanied by their mothers, in competition with the aim of winning a contract with a famous modeling agency.

In “Making a Model with Yolanda Hadid” she gives six models the chance to make it big. The young girls take part in the series with their mothers, because the 53-year-old wants to pass on her experiences as a “momager” – at least the concept works very well for her family and the Kardashians who are friends. After successfully taking photos at a young age, she also turned her daughters Bella and Gigi into real top models. This is what she now revealed to beginners in her own TV show.

The winning duo will be awarded a contract with the Hadids company and the chance to be represented by IMG Models New York who are responsible for Gigi and Bella, but also for stars like Candice Swanepoel, Alessandra Ambrosio and Karlie Kloss.

On “Making A Model”, the young models are to be coached for eight weeks, including on the catwalk and in front of the camera. The focus is particularly on developing the physical, mental and emotional strength that you need to build a brand for yourself. Even if it is Yolanda who is the focus of the show – according to the trailer, Gigi and Bella will not miss the opportunity to share their experiences with their future successors.

For a former supermodel, Yolanda Hadid is the height expected of women in her job, standing at 5 feet 8 inches which in inches is 172.7 inches.

Only a year after the birth of their daughter, the separation of Gigi Hadid and Zayn Malik went public. The messy breakup involved Yolanda Hadid who accused Malik of physically assaulting her in September. According to court documents reported to “People magazine”, Zayn was allegedly charged with harassment in four cases (Yolanda also accused Lisa Vanderpump’s husband of “touching” her once). The “One Direction” star denies the allegations. “I hope that Yolanda will reconsider her false accusations and resolve these family problems privately,” Malik said in October.

Then came the shocking headlines: Zayn Malik, 28, is said to have been violent towards the mother of his girlfriend at the time, Gigi Hadid, 26.

As an insider now explains to “People magazine”, a relationship has emerged stronger from the scandal: that of Gigi to her sister Bella Hadid, 25. “Gigi and Bella have grown closer since the incident with Zayn and Yolanda,” reveals the anonymous source. “Bella stood by her side as the situation created a lot of tension within the family,” the insider said.

Also on 16 Dec 2021, two months ago since Gigi Hadid and Zayn Malik broke up after an incident with mother Yolanda Hadid, now the focus is on Dua Lipa and Anwar Hadid who are throwing in the towel. As the year ends, it seems the famous couple are allegedly separated and there is little chance that things will work out between the couple. It seems that their busy schedules are now the reason they are no longer together, as they travel a lot for work and are in different places.

The singer from England spends a lot of time in London and her home country while Anwar works and lives in New York City. Several sources confirmed to The Sun that they are having a hard time dealing with it. “Their relationship is going through a crisis and appears to be on the rocks.”

Dua Lipa’s Instagram account shows that she posted her last photo with Anwar Hadid in September. It doesn’t look like the two are getting together anytime soon, meaning it’s going to be a lonelier Christmas for the Hadid family.

10. Walking down the runway again:

Yolanda Hadid seems to be making a comeback in the modeling world. Last year, the Dutch model walked during Paris Fashion Week together with daughters Bella and Gigi in the show of the Italian fashion house Off-White.

Yolanda Hadid, after 15 successful years, gave up her modeling career for her kids. What happened next is, well, let’s say classic middle age drama: botox, silicone and extensions.

But on her 55th birthday, Yolanda decided to no longer put her health on the back burner. She had her breast implants removed and stopped using botox injections. She writes on Instagram: “It took me years to reverse some bad decisions.”

The result is impressive. The 55-year-old says more confidently than ever: “I now live in a body free of breast implants, fillers, botox, extensions and all that crap I thought I needed to keep up with society”.

She goes even further and explains, “All that poison almost killed me.” She appeals to her followers: “Your health is your wealth. Please make considered decisions. “

Is this appeal secretly addressed to daughter Bella? Her look has changed a lot lately.

12. Her battle with Lyme disease:

During her participation in the TV show “The Real Housewives of Beverly Hills,” it became known that she suffered from chronic Lyme disease, which she had to treat for several years. In her autobiographical book “Believe me: My struggle with the invisibility of Lyme disease”, she describes her long struggle against the disease, which exhausted her completely and was barely visible from the outside. In December of 2012, she said she had a chamber catheter implanted in her arm to help treat the condition. In April 2013, she had this catheter removed. In January 2015, she stated that due to her illness, she “had lost the ability to read, write or even watch television”. In October 2019, Hadid reported that her disease was in remission.